I still remember how I came about acquiring Laser Squad. I had joined one of those software companies with a special introduction. You know the one: join now for only £10 and receive five free games, or something. Anyway the condition was that you had to buy at least one game per month for the year. I remember not bothering one month and a package came from them that included an odd looking game called Laser Squad. I discovered on the accompanying newsletter that this was the editor’s choice for that month and that, as I hadn’t chosen a game, it was sent out for me. Of course I went ballistic, sending this game out to me and billing me for the pleasure. Of course I had noticed the glowing Amstrad Action review, as well as others, but I figured that a strategy turn based game wasn’t my bag. However, for some reason I gave the game a shot and have never looked back.

Developed by the legendary Julian Gollop (he of Chaos, Rebelstars, and UFO: Enemy Unknown fame), Laser Squad is a science fiction tactical wargame that is played in a series of game turns. Each player takes turns to control their individual units (humans, droids or aliens). For each turn, units are given a limited number of action points, which can be used for performing functions such as moving, equipping weapons, firing, opening doors/locks, etc. Once all action points are used, the ‘End Turn’ option can be selected and the computer (or human player two) takes over for their turn. The eventual winner of a mission is the first side to reach 100 victory points. 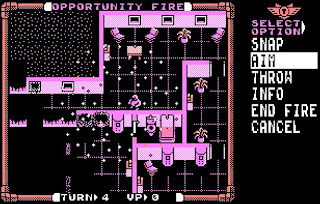 The main menu is fairly self explanatory. There are five missions to choose from: Assassins, Moonbase Assault, Mine Rescue, Cyber Hordes, and Paradise Valley, each with varying difficulty levels. You are then taken to the squad equipping screen. For each mission you are allocated a number of credits to spend on armour, weapons and ammunition. The first thing you do is select armour for each unit. Armour type ranges from ‘0’ (no armour) to ‘4’ the best and most expensive armour. Strategic element comes into play straight away here as the better armour inevitably weighs done your units, decreasing the action points available.

After you have allocated armour to each unit, it’s then time to choose your weapons. Each weapon, be it a gun, pistol or dagger, has its own individual cost, weight and statistics, so choosing weapons must suit the mission required. All weapons are fully loaded with ammunition, but extra ammunition clips are available. Once your happy with the equipment selection then it’s time to start deploying your units ready for mission one: Assassins. 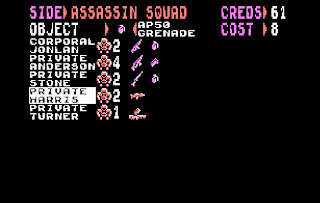 Assassins requires your squad to infiltrate and assassinate Sterner Regnix: the rogue boss of the Marsec Corporation – the best weapon manufacturer in the galaxy. Deployment of your units is carried out by selecting on the appropriate squares just outside Sterner Regnix’s hideout.

The joystick and button are used to move squad members by selecting a unit and moving him into position. The on screen display is divided between the playing area on the left and the menu commands to the right. Virtually every command you make is done via these menus. Moving a unit will cost Action Points, depending on the terrain that is being moved over.

One of the unique features of the game – and indeed, most Gollop games – is the realistic “hidden movement” system which means that the enemy will not appear on the map unless they have moved into the “field of vision” of one of your units. The “field of vision” covers the 45 degrees from the front of the unit. Various types of terrain such as walls or doors can block this line of sight though. You will not see an enemy unit until it is clearly in view. 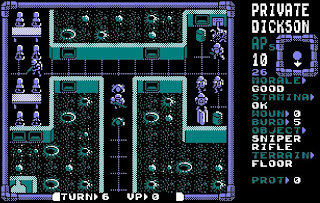 Another strategic element that is essential to winning the missions is “Opportunity fire”. If you leave a unit with at least half its Action Point allowance at the end of their turn then they will be eligible for opportunity fire. This “Opportunity fire” is triggered when an opposing unit enters the “field of vision” of one of your units. You can then take the chance to fire at the enemy with your remaining APs. Once you select ‘END FIRE’, your opponent then continues with their turn, assuming they’re still alive.

Other missions include destroying lab equipment, rescuing POWs from mine prisons, defending a rebel base against a never ending droid army, and retrieving and escaping an alien planet with the blueprints for a rebel starfighter. Cyber Hordes, arguably, remains the toughest of the lot, and is a challenging level for even the hardened strategy buff. 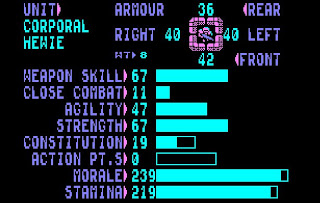 An Expansion Kit was made available through Target Games in 1990, with two extra missions: The Stardrive and Laser Platoon. Both missions boasted improved graphics and gameplay. Needles to say, I quickly sent away for my copy. Over a decade later, I was still playing the odd mission of Laser Squad, struggling to get the dusty old CPC down from my spacious attic and firing up the, then, unreliable tape deck into action. The tape deck eventually gave way altogether, so it goes without saying that I eventually got a CPC emulator and disk images to play on my PC. Great times and a great game.