(An aborted feature originally intended for issue one of Retroaction – it just wasn’t satisfactorily completed.)

If the past has taught us anything it’s not to trust hyped up computer games, especially film licences. Virtually every big hit film has been given the home computer treatment. With a hit film behind the licence, games publishers thought that the free movie publicity would guarantee a good return for their games – and they did for a while. One of the major turning points in film licences was the E.T. debacle; the game was rushed and played so badly that it was reported that the majority of the cartridges were returned. The E.T. incident has also been credited as one of the main factors for the video game crash of. The industry quickly learnt that a rushed and decidedly dodgy game did not guarantee a good sale, no matter what amount of hype and advertisement it gets. In some ways film licences have improved, but there are always some dreadful ones, either by poor design or something that just didn’t work out the way it was intended.

For those that are unfamiliar with the successful film franchise (yeah, you, the one who’s been cowering under a rock for the past 15 years), The Terminator is a science fiction action film, which was directed by James Cameron back in 1984; and pretty darn good it is too. The film features the concept of a “Terminator”, a virtually unstoppable cyborg assassin sent back from the year 2029 by an artificially intelligent computer hell-bent on the extermination of mankind. The Terminator’s mission was to travel back in time to kill Sarah Connor, thus preventing her son, John Connor, from forming a resistance against the machines in the future. The film became a popular phenomenon leading to two sequels and various spin-offs and merchandise, including many computer and video games. The games are either based directly on the movies or are heavily involved within the film’s expanded universe. 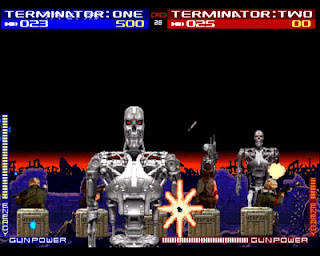 A DOS computer Action-adventure game based on the first film was developed and published by Bethesda Softworks in 1990. Viewing the game through the first-person perspective screen, the player can play as the film’s character, Kyle Reese, or as the Termintor. As Kyle Reese, the player has to protect Sarah Connor from a Terminator hell-bent on killing her, while playing as the Termintor the role is reversed: you must hunt down and kill her. A pretty fine attempt at creating a 3D environment with the Terminator franchise, if only a little stiff.

In 1991, the second film, Terminator 2: Judgement Day, was released to a huge commercial success. Naturally, the games industry was quick to produce games based on or around the film. Midway developed T2: The Arcade Game, a light gun arcade game loosely based on the film. The gameplay is very similar in style to the classic Operation Wolf game. It was also ported to various computer and console platforms.

Acclaim decided to develop an Action Adventure game based titled Terminator 2: Judgment Day, which was released on various console systems including NES, Mega Drive, Super NES, Game Gear and Master System. It is loosely based on the film and consists of five levels: including isometric racing sections and side-scrolling beat-‘em-ups. A Game Boy version was also released by LJN. Ocean Software also got in on the act with their Terminator 2: Judgment Day conversion, which was released for the home computers: Amiga, Amstrad CPC, Atari ST, Commodore 64, DOS, and ZX Spectrum. This was essentially a platform game with top-down perspective levels, loosely based on the film’s main action sequences. 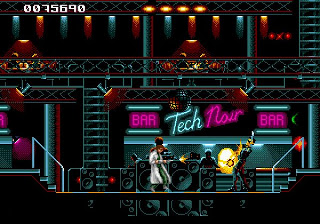 The first Terminator film made its belated game appearance on the Sega consoles (Mega Drive, Master System, and Game Gear) when Virgin Games released a platform action game in 1992. Coded by Probe Software, the game featured gameplay based on the first film: future soldier Kyle Reese going back in time to Los Angeles, 1984 to protect Sarah Connor from the Terminator. It features some great presentation, sound effects, music, and gameplay. The only problem being that the game can be completed quite easily, what with there only being four levels and plenty of energy pickups available. The Mega CD release features new level design, music, and an all-important difficulty level.

Nintendo players also got a taste of the first Terminator as it graced the NES and SNES in 1992 and 1993 respectively. Developed by Gray Matter and published by Mindscape, the game features side-scrolling, shooting action. 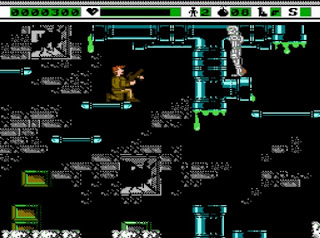 The franchise returned to the DOS platform with The Terminator 2029. Using the first-person perspective popularised by Doom, Bethesda Softworks produced an action-adventure game based on the film series: the player assumes the role of a Special Operations Group member who must destroy Skynet.

In 1993, the franchise joined forces with another film hero when RoboCop vs. Terminator appeared. Developed by Interplay Entertainment and Virgin Games, the game appeared on all major games consoles. Based on the comic book mini-series of the same name, the game features side-scrolling platform action with the player controlling RoboCop, fighting off the hoards of Terminators.

The Terminator: Rampage is another DOS based first-person shooter developed and published by Bethesda Softworks in 1993. The game features a story set within the film’s universe: Skynet evades its defeat to John Connor’s rebellion by sending a computer core into the past, which then builds an army of terminators. The player takes on the role of a rebel commando sent into the past to destroy the computer core and terminators. 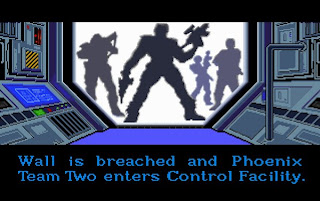 Bethesda Softworks produced another two DOS games, The Terminator: Future Shock (1995) and SkyNET (1996), before the franchise moved onto the next generation of games machines. Future Shock was one of the first games to use real 3D graphics and free mouse-look.

With further films, TV series, and video games being produced on the new generation platforms, the Terminator franchise shows no signs of slowing down, which is a testament to the original film’s premise.

One Response to “From Silver Screen to Computer Screen – Terminator”