(For those that want to know how the GamesMaster article finishes – it was cruelly mashed up in the first issue of Retroaction – then here it is.)

On Channel 4 at precisely 6:30pm on Tuesday 7th January 1992, something amazing happened for gamers across the UK; a phenomenal piece of gaming history that influenced others to follow in its path. This was, of course, the premiere broadcast of a new video games show entitled GamesMaster. Finally, gamers had an entire television show dedicated to their hobby, their machines, and their games. Sure, it was short and sweet, but it was ours. Many imitations came and went over the years, but GamesMaster was undoubtedly the first, not to mention the best, of its kind. From its “virtual world” opening credit sequence, the cheeky Scottish presenter, the production design and the guest reviewers, GamesMaster offered something different, something unique, and a legacy that lasts to this day – albeit in a slightly diluted form – with the GamesMaster magazine. 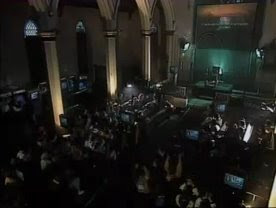 The show’s format was principally three games playing challenges (including a celebrity challenge), which were punctuated by reviews, news, features, and the Consoletation Zone (containing hints, tips, and cheats). As you can imagine, this was a lot to fit into 22 minutes of airtime, but the guys behind the show did a fantastic job. So, let’s go back in time to January 1992 and relive the historic premiere episode all over again…

The show opens in the mistiness of a church interior as the crowd go wild. Video arcade games line the far end of the wall and the crowd line up in the pews. A fresh faced Dominik Diamond steps down from the organ, heads towards the centre of the main stage and introduces the show: “Welcome to GamesMaster. Television’s first ever videogames magazine show. Dedicated especially to people out there who find Pictionary pointless and Kerplunk a waste of marbles.” After he explains the show’s premise, he then introduces us to the GamesMaster himself: Sir Patrick Moore, who appears in pre-recorded inserts and sets the games challenges.

Challenge one is Super Mario Bros. 3 and the first challenger, Daniel Blake from Edgewell, has the task of collecting 50 coins in two minutes on level one. Dominik enters the commentator’s box to join the show’s first co-commentator “world famous computing celebrity” Julian Rignall (of Mean Machines and Computer and Video Games magazine).

The challenge begins, and after a minor stumble (he misses the secret tunnel at the first attempt) Daniel is successful, walking off with the first ever GamesMaster Golden Joystick award. Dominik offers his congratulations: “If you take that back to Edgewell with you, put it in your hand and walk around proud and erect through the high street.” 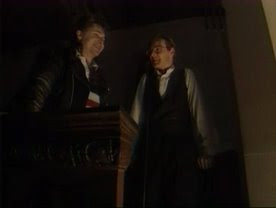 Just like the magazines at the time, GamesMaster included reviews of forthcoming titles. In an attempt to give the show some credibility with the viewers and gaming industry alike, the producers hired the cream of games journalists from the main publishing companies such as EMAP and Future Publishing. This gave the show the opportunity to use the collective views from journalists who worked on magazines including Mean Machines, Computer and Video Games (C&VG) , ACE, Sega Power, and Amiga Format.

For episode one, the three reviewers look at movie-to-game adaptations. Up first is The Terminator on the Sega Mega Drive. David Wilson (Zero magazine) describes it as a “…good game. It’s very playable. Nice big sprites. Lots of exciting explosions and gung-ho action.” Tim Oberman (who?) points out the “…digitised screen shots, which are very impressive.” Radion (C&VG) tells us “…for once, it’s a Mega Drive game that packs a real challenge.” The final verdict is a decent 87%.

Dominik introduces the next game as a “macabre romp ‘round your Nintendo with The Addams Family.” “For youngsters, it’s a good game,” explains David Wilson, “…and it certainly would give you value for money in terms of playability because it’s very addictive. But it doesn’t really offer much original or new.” An average final verdict of 63% is given. 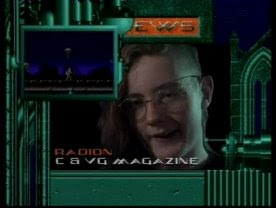 Indiana Jones and the Fate of Atlantis for the PC rounds off the reviews. “A much more sophisticated game,” states David, “…superior graphics, and the depth of the story and puzzling is at a much higher level.” Radion tells us “it’s got all the makings of a Lucasfilm game. If you look at it, the attention to detail; the quality of the graphics… [it’s] …one of the best PC adventure games.” A fine final verdict of 93% is awarded.

Following the reviews is a quick feature on Gameboy customisation. One guy has put skateboard grips onto his Gameboy to make it more comfortable and to stop his hands sweating so much. While a woman tells us that “a Gameboy comes into this world naked and it’s just begging to be designed. It’s crying out to be scribbled on, drawn on, smashed up and designed all over.”

Celebrity Challenge time, and The GamesMaster tells us that the game he has chosen is Manchester United Europe (also known as European Club Soccer to console players). The game will be played over two 90-second halves, with Simon Reynolds from Bishop Stortford taking on (then) Wimbledon and England striker John Fashanu. Joining Dominik in his “pulpit dugout” to co-commentate this time is Renegade Software’s Tom Watson. The game begins well enough – despite some dodgy tackling – and both players hit the post within seconds of each other. However, the first halve ends goalless. Simon goes into the lead in the second half, after a blunder from John’s goalkeeper. John has a chance to reply with a quick equalizer, but manages to smack the ball onto the bar from two yards, much to the amusement to all present. Simon takes advantage of John’s lapse in concentration and scores a long-range effort to help him win the game 2-0, taking home with him a GamesMaster Golden Joystick. 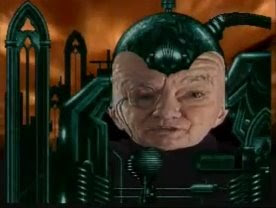 Oh dear, it’s now time for the Consoletation section, where members of the public ask the GamesMaster for tips and cheats on their favourite video games. One guy is having trouble finding the “secret world” in act three of Sonic the Hedgehog. He “can’t find it anywhere.” The GamesMaster shows him how to spin through a wall and into a room with bonus rings. Another guy is having trouble with spells in Elvira, and the last Consoletation involves Simon’s Quest, and a cliff.

For the final challenge, the GamesMaster chooses the arcade light gun game Mad Dog McCree. The challenger, Tony Wright from Wales, must rid the town of outlaws and free the imprisoned sheriff who is held hostage in his own jail. “So get your pistol hammer cocked, and let’s see those barrels blazing.” Co-commentating with Dominik this time is Tim Boone (editor of C&VG magazine). The shooting is top drawer, and Tony takes out on-comers left, right and centre, frees the sheriff, and wins himself the coveted GamesMaster Golden Joystick.

As Dominik closes the episode, he dons his smoking jacket to go and have a “refreshing cup of camomile.” He tells the audience that he’ll “see [them] again in seven days,” before disappearing into the haze of the church with a monk following closely behind. The camera pulls away as the closing theme kicks in, and the computer-style closing credits begin to roll.

2 Responses to “GamesMaster – series one, episode one”